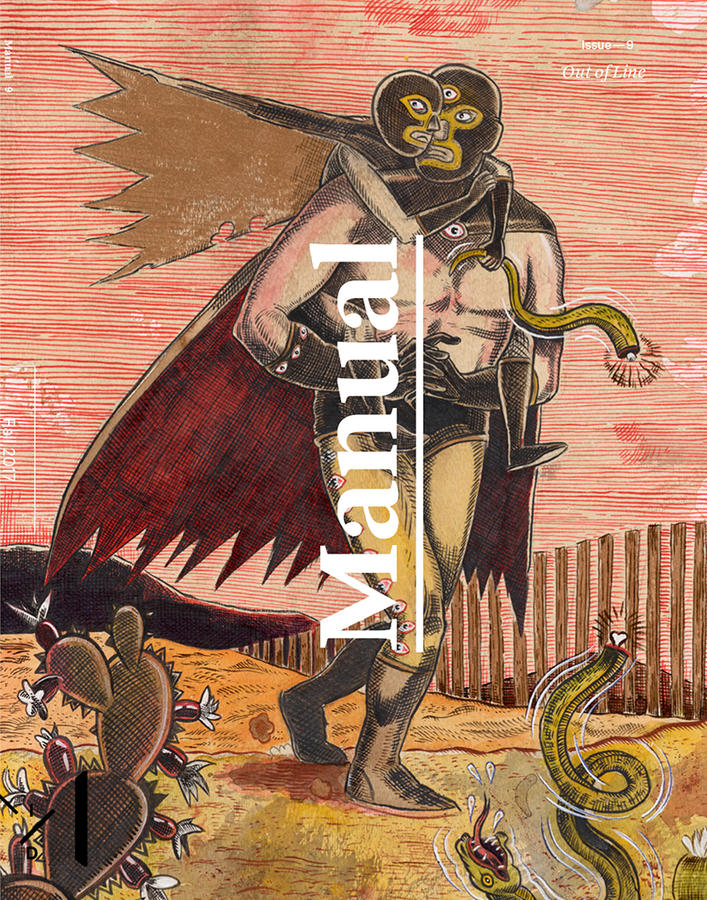 Issue 9—Out of Line

This issue of Manual—themed Out of Line—is a collection about the way that lines disrupt, point outward. In poetry, the attention to detail one takes in crafting a line is all about making the line disappear, making something it holds to take front stage. . . . The space between the lines creating the image . . . the space around that argues for the importance of all that the lines hold. Out of line—or you got me fucked up, as someone might have said in my youth. A way to say, the thing you think you know, ain’t right. The thing said, done, imagined: a crossed line. These lines we draw are all about history.

—Reginald Dwayne Betts, from the introduction to Issue 9: Out of Line

Stefano Bloch and Namita Vijay Dharia map the meanings of Your House is Mine (All City); Jared A. Goldstein and Mimi Cabell survey the legal and emotional boundaries of Carey Young’s Declared Void; Fida Adely and Lucinda Hitchcock champion Blue Bra Lady as political protest; Sheida Soleimani and Kate Irvin sing the praise of an Iranian dervish cap

Jeffrey Moser draws on mist as method in Cloudy Mountains, attributed to Mi Youren; Jan Howard considers drawing and disruption in the work of Shahzia Sikander

Issue 9: Out of Line is supported in part by a grant from the Rhode Island State Council on the Arts, through an appropriation by the Rhode Island General Assembly and a grant from the National Endowment for the Arts. Additional generous support is provided by the RISD Museum Associates and Sotheby’s.
Out of Line complements Lines of Thought: Drawing from Michelangelo to Now, presented in collaboration with the British Museum. Lead sponsorship for the exhibition is provided by a grant from the Robert Lehman Foundation and an indemnity from the Federal Council on the Arts and the Humanities. Programming support is provided by the Museum Associates, National Grid, Site Specific, and Radical Media with additional support from Sotheby's and MOO. Lines of Thought was developed and toured the UK with the support of the Bridget Riley Art Foundation.