Over the last several decades, the relationship between the US and China has suffered twists and turns, rooted in different ideologies and social foundations. The Covid-19 pandemic and subsequent surge of anti-Asian violence in the US contributed to the exacerbation of this global controversy, triggering an undeclared Cold War. However, in history over hundred years, there was a real dialogue between the US and China through business trade. The high classes in the US were used to buy Chinese export commodities, such as luxury furnitures and porcelain, and similarly, Chinese merchants bought American goods, which caused naturally lead to an ideological exchange. By contrast today, the US and China are in the midst of a trade war. The exhibition describes the interrupted communication, the loss of cultural sharing, and the tremendous changes in the relationship between the American and Chinese societies since the 18th century. This is a space which aims to understand socio-political changes, and promote cooperation between these two powerful countries.

Living rooms and their contents are chosen as a social and cultural metaphor to describe the shifting relationship between the US and China, as the living room is the intersection space in a house that combines private experience and social activities. There are 10 living rooms in the exhibition, which are divided into two groups: one group for the US and one group for China. And at the end of the exhibition, there will be a contemporary living room, which provokes a conversation among audiences from these two countries. The items will be displayed in the stacking boxes system which provokes the role of museum preservation. The magnifying glass on them will highlight the details of the furniture, through which audience can find some similarity.

Amid the latest political tension between the US and China, universities seemed to be the only place where cultural exchange remains intact, mostly because of the diversity of students' backgrounds. The Rhode Island School of Design and Tsinghua University in Beijing will be the sites of this collaborative exhibition, due to the similarities and affiliation between these two well known institutions. The exhibition will be shown in the art museums of the two schools simultaneously, allowing audiences in America and in China to share their comments in real time. The items will be displayed in a series of reconstructed Living Rooms from different time periods, but rather than only provide a pure aesthetic experience through style, furniture, and decorations, the spaces will work as places of encounter where the lost communication between the two countries will be reconstructed through acts of intimate cultural exchange.

With the process of commodity exchange and colonization, culture spreads on a global scale, constantly breaking through the limitations of the region and mode of the national culture. For museum and exhibitions, the national boundary should be broken and construct in a global vitision. As a public instruction institution, the national heritage exhibited in the museum aims to find a general public history. With the sharing of resources and cultural exchanges,  "the hegemonic culture influencing the entire world will ultimately result in the end of cultural diversity."2 "Although homogenizing influences do indeed exist, they are far from creating anything akin to a single world culture"3, instead, the mixture of different cultures is an entire process globally, so the exposure to the respectively other culture can lead to a better understanding between the cultures, and adapt the benefit elements for a better worldwide culture formation.

Cultural globalization involves the formation of shared norms and knowledge with which people associate their individual and collective cultural identities to create a “cultural memory”.In social dimensions,  cultural memory is “the faculty that allows us to build a narrative picture of the past and through this process develop an image and an identity for ourselves.” 2  Cultural memory is like an impression related to specific history and facts to discribe the consequence in the public of the culture change. Through the collective cultural memory, an entire era can be restored.

In the history, the culture has been developed crisscrossly because of the communication between different cultures. For example, because of the bussiness trading, Chinese goods saled to the Europea leading a cultural revolution and the public's taste has been changed. Therefore, the culture history can be divided into different period based on different features influced by different cultures. According to Michel Foucault , the museum is defined as a "heterotopia of indefinitely accumalating time."1 Audience can shuttle the history by going through the entire exhibition based on the timeline order of the selective objects. "History" is a concept created to describe the existed humanity development. It is an objective concept so people relate to historical stroies based on their understandings of the cultural diversity. To better understanding our own culture, we have to understand the differences between different countries or other backgrounds.

However, histroy is numerous and jumbled. The historical story told by the exhibition should be classfied for audience to self-study. For Assmann, cultural memory is based on fateful events of the past, on fixed points which he calls ‘figures of memory’ 1. I am thinking of using the typical icons of the cultures to restoll the memory of a specific cluture in a period.

Eventhough the artefacts in the exhibition are real, the cultural understanding created by the exhibition is a impression not reality. Therefore,  the intervention exhibition in this book is not an archaeological exhibition, instead, the core concept is to create a dialogue between the New England culture and the Beijing culture.

Living room is a intersection of the public space as well as the private space, therefore, everyone in the livingroom has a rich memory privately and commonly. So I chose the living rooms against two cultures in different period as the lens through which to explore the historical background of two cultures.

The living room in the exhibition is a figure of the cultural memory consisting of chaotic furnitures, decorators as well as architecture structures. Through the living room, audience are encouraged to recall the previous aesthetic, traditions, fashion, war, pain, etc.

The exhibition focuses on reconstructing and deconstructing living rooms in different time period in USA and China. The goal of the exhibition is to encourage audience to be educated and exchange ideas. There are three part in the exhibition: contemporary living room installation for the live streaming, historical living room installation and communication room. Through the multiple activities in these three parts,  audience are encouraged to understand why the relationship of these two big countries changed, and figure out the continous connection hidden under the shifed relationship. In the future, please imgine, what will be the trend of the relationship of these two big countries. 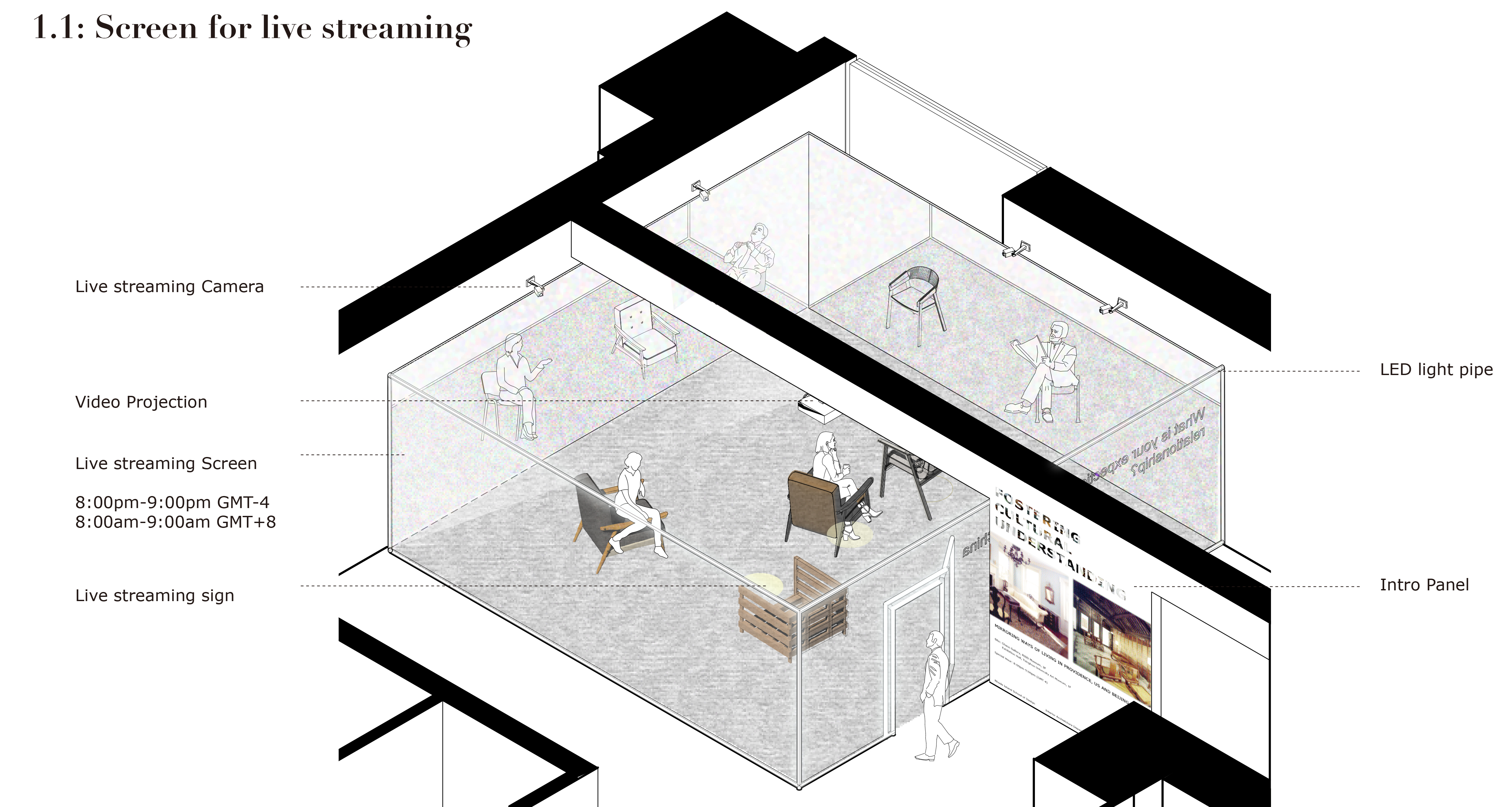 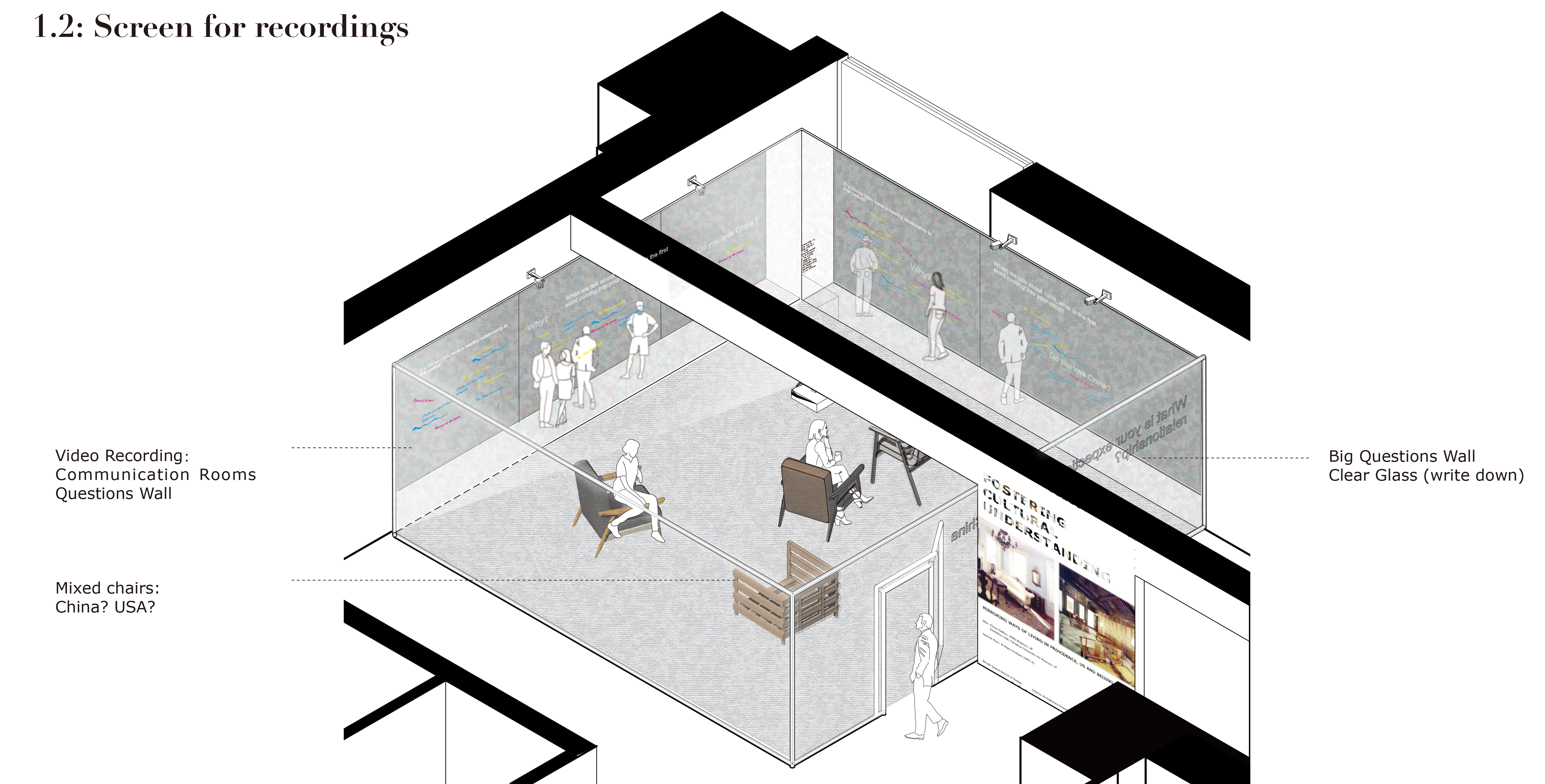 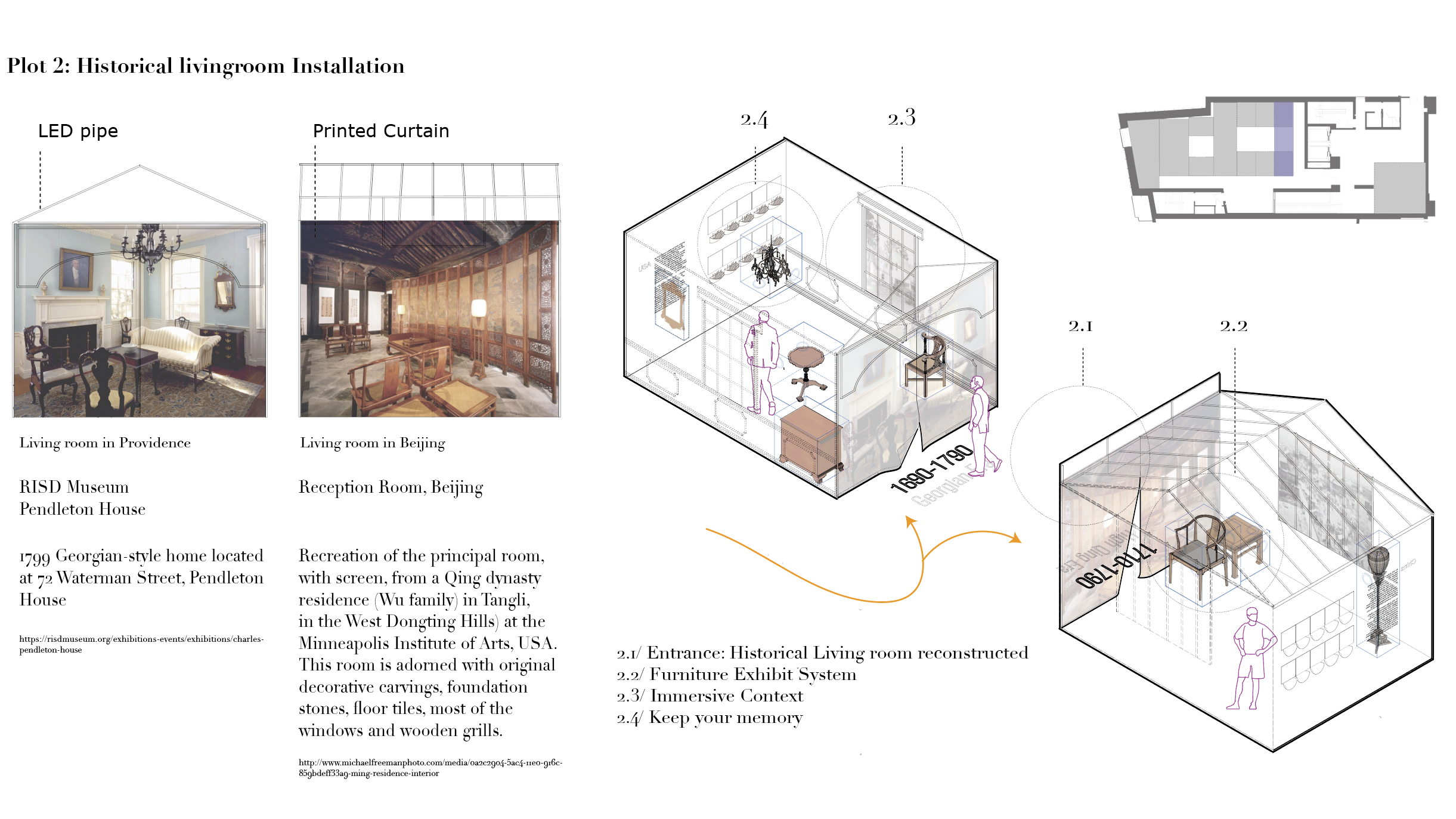 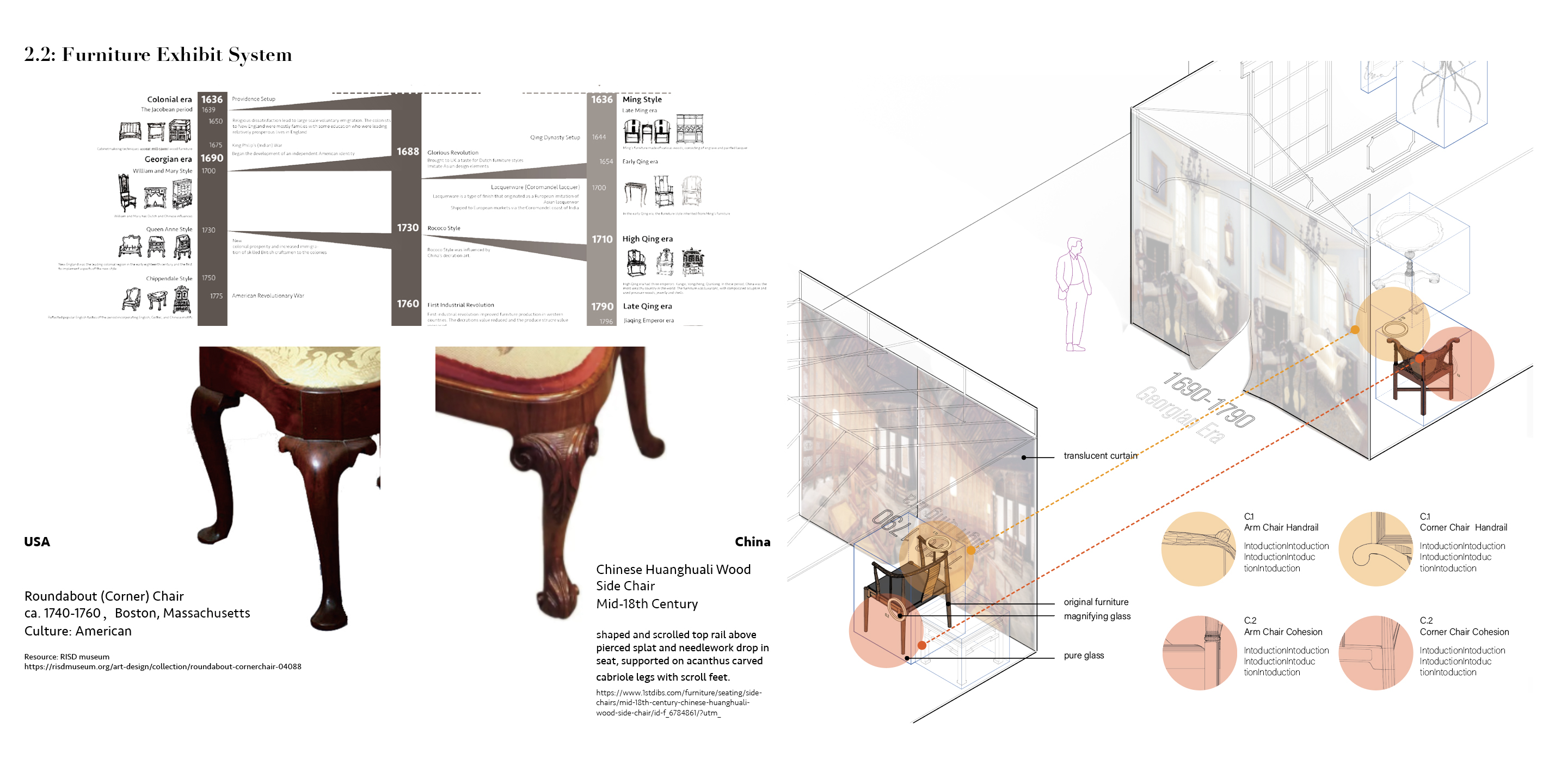 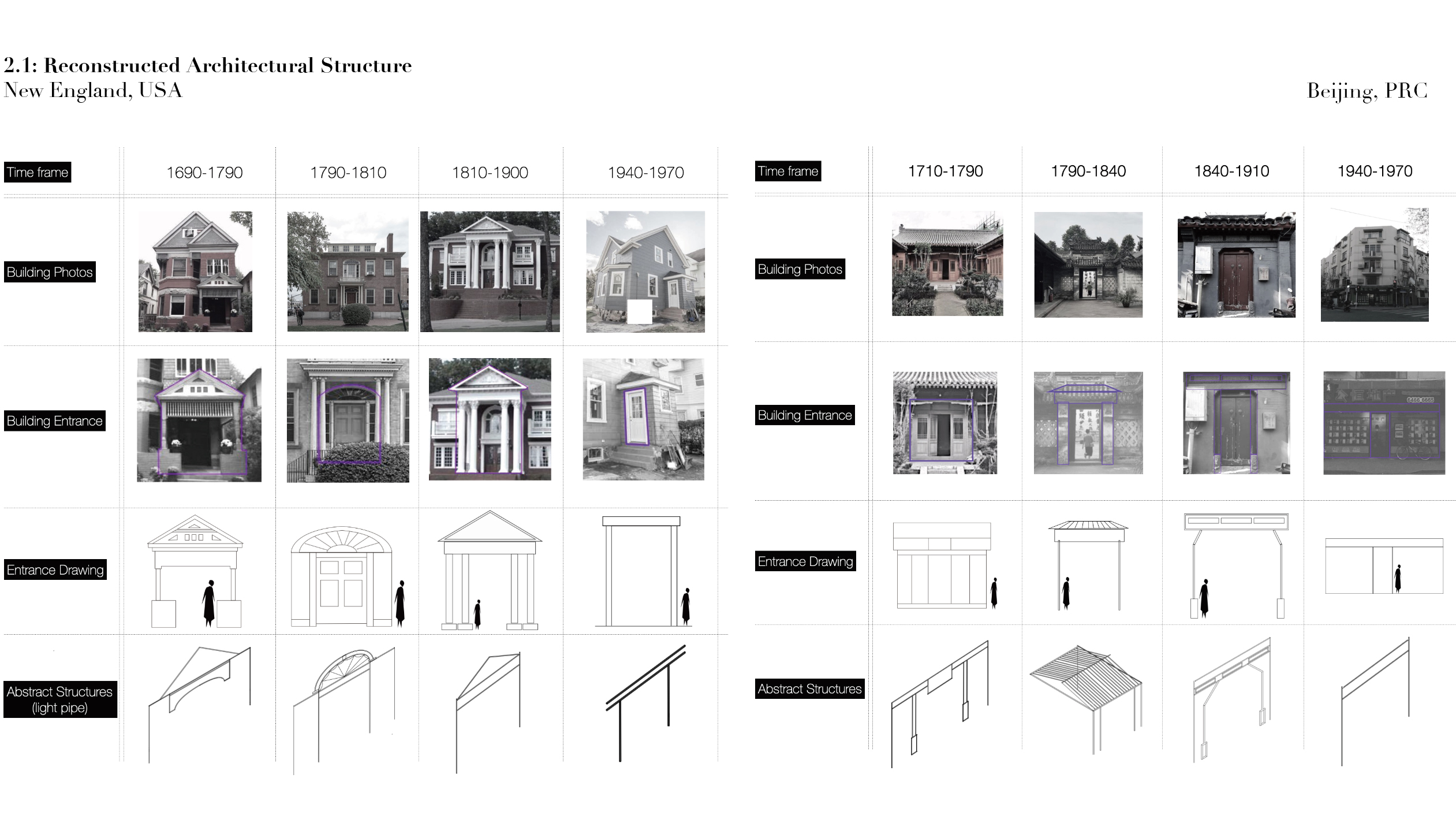 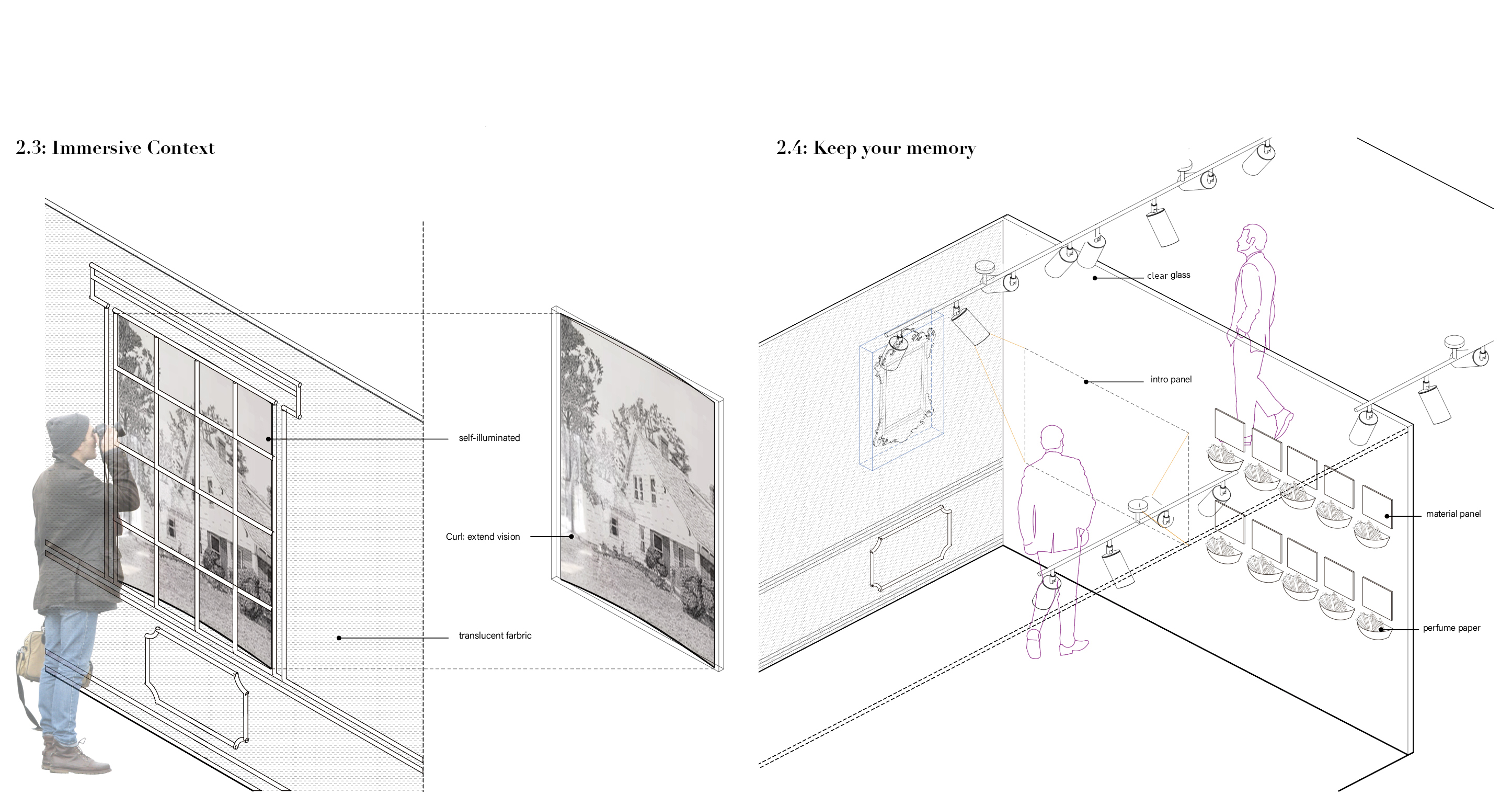 ▲ Three plots and details in the exhibition

In the exhibition, there are several groups of the living rooms. Audience can compare the difference between Beijing's living room and Providence's living roomin a general vision. And when they zoom in the details of the items in the living room, the magnifying glass system created in the exhibition will envcourage the audience to acknowledge the similarity and connections between these two cultures.

In the conversation room in the exhibition, audience are encouraged to write down the big question about the shifted relationship.  They should show their answers and see others answers. It is a cooperation for the audience to understand.

In some special time period,  there will be a live streaming in the exhibition. So audience in USA and in China can have a in time talk about the understanding of the country relationship.

▲ general vision of the exhibition hall

This article talks about the effect of the globalization.

This book used as a reference for making the New England furniture generation timeline.

Berliner, Nancy. Beyond the Screen : Chinese Furniture of the 16th and 17th Centuries. Museum of Fine Arts, 1996. http://0-search.ebscohost.com.librarycat.risd.edu/login.aspx?direct=tru…

This book introduce the Rhode Island fureniture production on a timeline base. It used as a reference for making the New England furniture generation timeline. And also used for select furniture collections.

This book discribes the histroy of the Tsinghua University.