As a remaining influence of Spanish colonialism in the Philippines, the church stands as a typical landmark and prominent feature in provincial towns. The urban planning is reminiscent of the “plaza mayor” complex wherein the church is central to the town surrounded by other administrative or institutional buildings such as a Municipal hall, government offices, and the like. This central area is generally where most of the town’s community gathering takes place. Other community centers typical to provincial towns would be public markets, schools, sports complexes, community centers, and such.

Churches have already been commonly used as centers for evacuation and refuge services during calamities and are usually the first establishments to be rebuilt during the aftermath. Hence, the proposal of incorporating an evacuation center as well as making the structure more resilient for an existing church, a plausible study. The church is not only central to the town in context of proximities, but also, it is relatable and significant to majority of the population.

The surrounding structures of the church and other community centers are primarily an even mix between residential and commercial, sometimes even both. The diagrams below depict the commonality churches in coastal towns in relation to proximities. 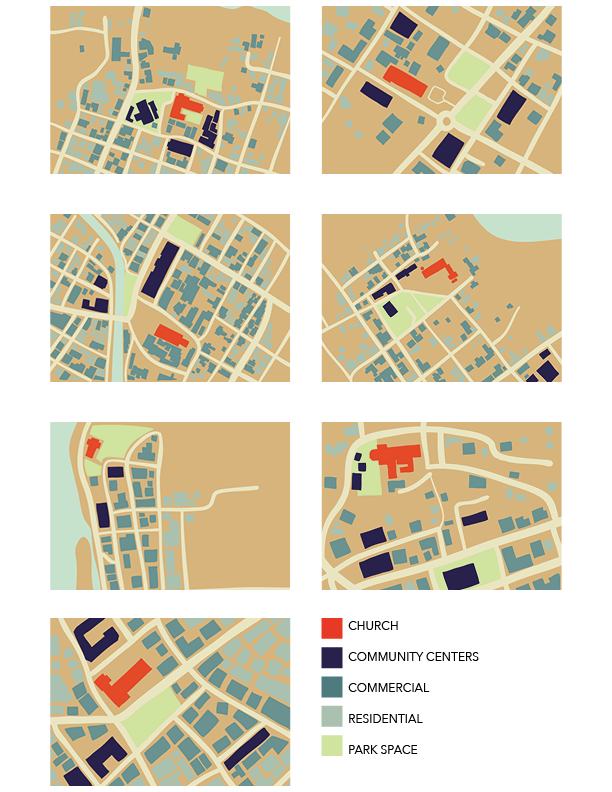 The Philippines is an archipelago of 3,641 islands with 80% of the population, dwelling along the coast. As a result of climate change, vulnerable coastal communities are situated at the forefront of intensifying typhoons and sea-level rise. Almost half the fatalities in flooding are due to people being stranded, and though there may be evacuation centers, these are usually either inaccessible or unequipped for proper deployment. The majority of these make-shift evacuation centers are in churches, schools, gymnasiums, and other community centers.

In 2013, Typhoon Haiyan struck the southern part of the Philippines with a five to six meter storm surge; in just three days it took more than 7,360 lives in one city alone, displaced four million citizens, and affected around 16 million Filipinos nationwide.

If we continue at today’s rate of carbon emission, population density, and global warming, 30 years down the line, we will probably be looking at about 0.6% fewer islands in the Philippines ¹, and about three times more typhoons. It is critically urgent to shift the existing paradigm in urban design and architecture towards coastal resiliency and environmental awareness, particularly when it comes to evacuation planning and mitigation. However, much of the country’s cultural heritage lies in these coastal towns, as they bear deep roots to many Filipino communities and livelihoods.

This thesis aims to challenge the existing paradigm of coastal provincial architecture in the Philippines by proposing a more integrated evacuation center that adapts to sea level rise and climate calamities. The focus of the study will be a church in a small coastal town, as churches have historically provided physical sanctuary as much as symbolic salvation to Filipinos, the third biggest Catholic nation in the world. Churches are also one of the most common building typologies in Philippine coastal provincial towns, and they are often located at the heart of the urban community. The study will focus on the overall context of the selected site, St. John the Baptist Church, San Juan, La Union. The framework of the design will be based on FEMA standards as well as research gathered from multiple case studies from across the globe. Through a methodical incorporation of resilience in architecture and communal gathering programming, the proposed intervention will showcase an innovative approach in landmark preservation by means of adaptation - how a social and cultural landmark can co-function as a resilient and human-scale evacuation area across the coastlines of the Philippines.